The whole history of the Via Claudia Augusta

The Via Claudia Augusta is the only road whose history has been written down on two Roman milestones. On this page, you can read up on the milestones and the general history of the Via Claudia Augustafrom its ancient predecessors to its Roman, medieval and early modern incarnations and up to the present day. There are two other pages containing images and brief texts about the history and stories behind the regions and towns along the Via Claudia Augusta. The (Hi)story section of this platform also contains a historical database, which you can search for information about the road, its sections and its towns. It also contains ‘4 maps through the centuries’ picturing the regions along the route.

Milestones tell us the story of the road

The Via Claudia Augusta is the only Roman road that has been documented in writing on two milestones. They are the milestone at Rabland/Rablà (South Tyrol) and those at Cesiomaggiore near Feltre (Veneto). The two milestones tell us the name of the road, when it was built, its northern and southern end points, its route, its owner, and – quite unusually – its ‘inventor’. Both of the latter  titles were held by Emperor Claudius Augustus, who clearly wished to make a name for himself among his subjects and generations to come.

The milestone of Rabland/Rablà (South Tyrol)

Translation:
“Tiberius Claudius Caesar Augustus Germanicus, Pontifex Maximus, bearer of the tribunicia potestas for the sixth time, designated consul for the fourth time, emperor for the eleventh time, Father of the Fatherland, has expanded the Via Claudia Augusta, which his father, Drusus, had built following the opening of the Alps in the war, from the Po to the Danube along a stretch of 350 miles.”

The milestone was discovered in 1552 and is on display at the Civic Museum of Bolzano/Bozen today. A copy was erected at its discovery site in front of the Hanslwirt inn in Rabland/Rablà.

The milestone of Cesiomaggiore near Feltre (Veneto)

Translation:
“Tiberius Claudius Caesar Augustus Germanicus, Son of Drusus, Pontifex Maximus, bearer of the tribunicia potestas for the sixth time, designated consul for the fourth time, emperor for the eleventh time, Father of the Fatherland, censor, has expanded the Via Claudia Augusta, which his father, Drusus, had built following the opening of the Alps in the war, from Altino to the Danube along a stretch of 350 miles.”

The milestone was discovered in Cesiomaggiore in 1786 . It currently stands at its discovery site in the building adjacent to the Villa Tauro delle Centenère from the 16th century.

Further Roman milestones were found in Nauders, Tenna, and Alani di Piave. Unlike the milestones of Rabland/Rablà (South Tyrol) and Cesiomaggiore near Feltre (Veneto), they are not memorial stones. They only marked distances.

Many towns along the road have erected replicas of the milestones of Rabland/Rablà and Cesiomaggiore as memorials to the Via Claudia Augusta. 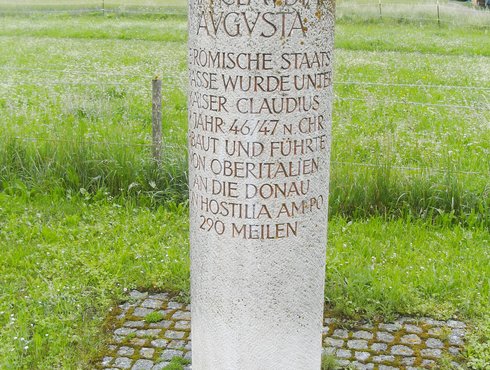 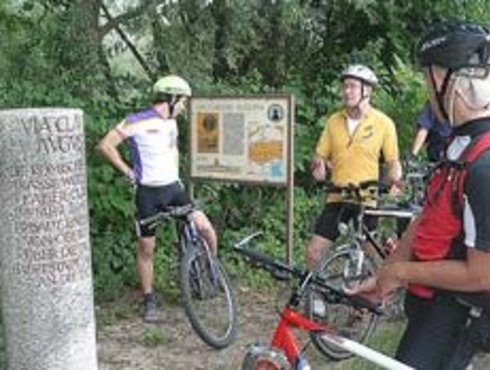 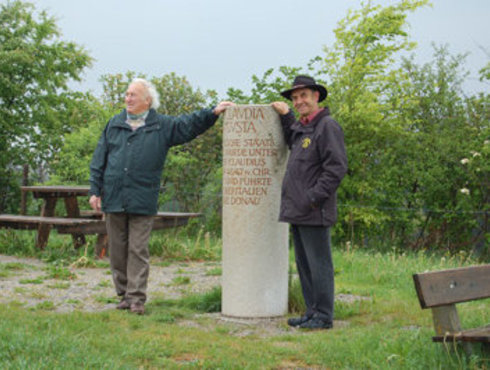 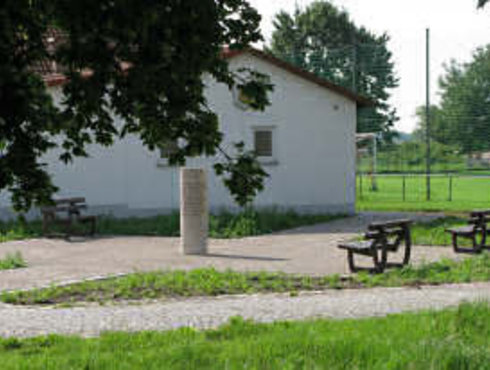 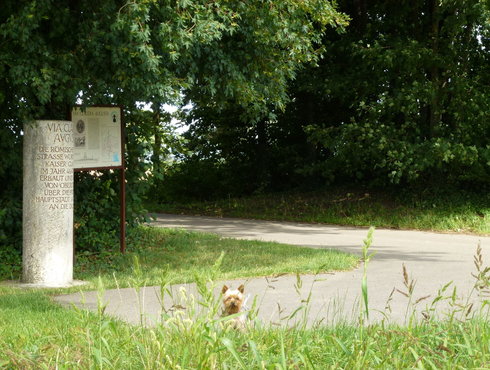 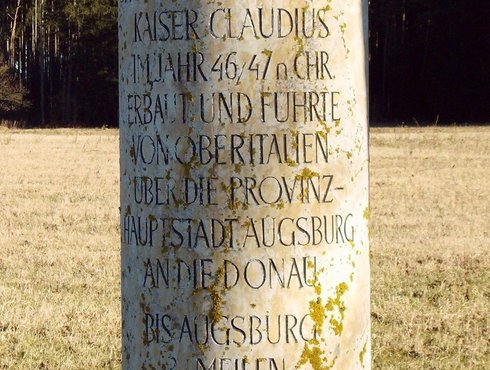 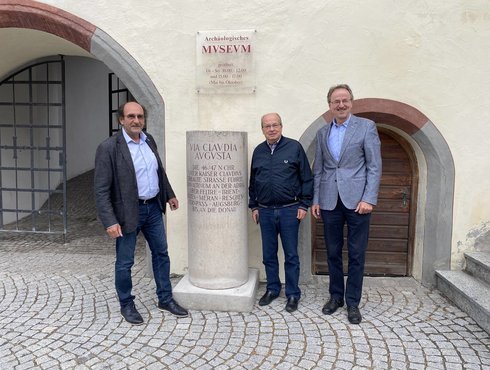 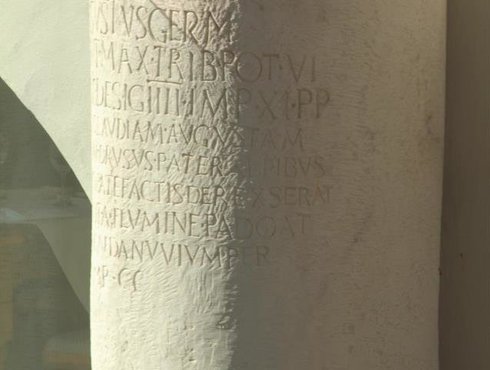 The Via Claudia Augusta through the ages

There were paths across the Alps even before the Romans arrived. But the Celtic and Rhaetian tribes did not need spacious, comfortable roads. They did not live in a common, strictly governed state but were organized in tribes. Unlike the Romans, they did not have mass production or mass transportation. In ancient times, the roads leading through the Alpine valleys were only cart paths that connected the various settlements. The roads across the mountain passes were simple mule tracks, just wide enough for beasts of burden.

That is how to picture pre-Roman mule paths.

The Etruscans, Venetians, Rhaetians, and Celts were in contact with each other and travelled across the Fernpass and Reschenpass to visit each other’s settlements.

The expansion into an ancient Alpine highway

During the Alpine Campaign, Augustus’ step sons, Drusus and Tiberius, already began to expand the existing paths to carry the Roman troops. The Via Claudia Augusta underwent frequent improvements until 46 A. D. In the end, the first road that connected Europe across the Alps was 6–8 meters wide in most places and carried travelers in both directions. There were even traffic rules in place at narrow sections. The road bulged in the middle and sloped towards the roadside ditches on the left and right. Its shape allowed the surface to dry quickly after rain and snow. That was important, as troops needed to move along the road quickly. The ancient Alpine highway also facilitated trade, completely without customs tariffs or tolls. In a way, you could call the Roman Empire the European first internal market. 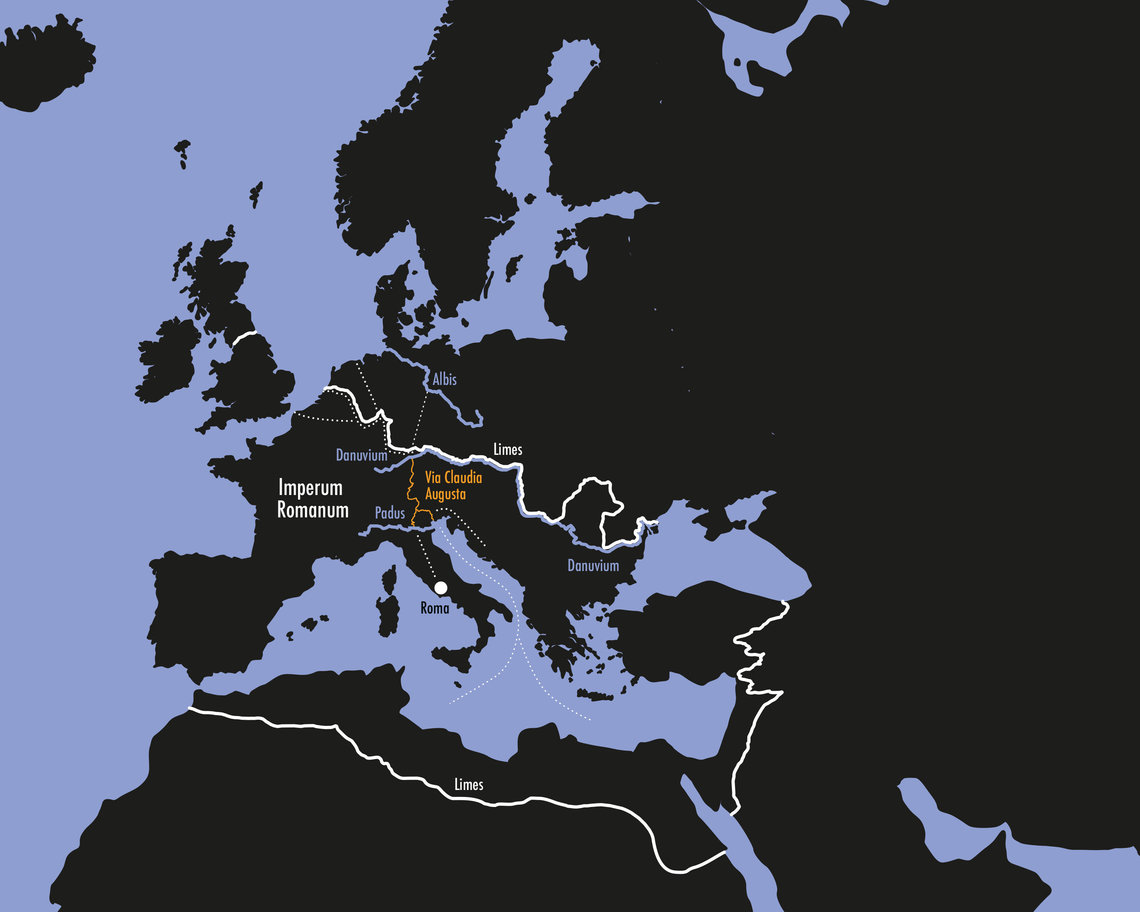 The route and significance of the Via Claudia Augusta

A typical sunken track across the Fernpass

Utilized until the last

The Roman roads remained in use even after the fall of the Roman Empire. But they were no longer maintained and gradually fell into disrepair. Carts sliding down hills with their brakes engaged slowly turned the Roman roads, which originally bulged in the middle, into sunken tracks. Sophisticated sections of the road, such as the “Prügelstraße” that floated on tree trunks between Lermoos and Biberwier, were eroded. The road leading to the gorge to the north of Bolzano/Bozen, which was part of the Brenner Route and became the most easily passable  and most frequently used Alpine road from 200 A. D., became derelict. Travelers once again had to cross a third mountain pass, the Ritten, and the Via Claudia Augusta became the most important road across the Alps for centuries once more. On top of its state of disrepair and the danger that came with it, there was also a risk of highway robbers. Trade stagnated. The economy declined.

Vehicles along the salt road 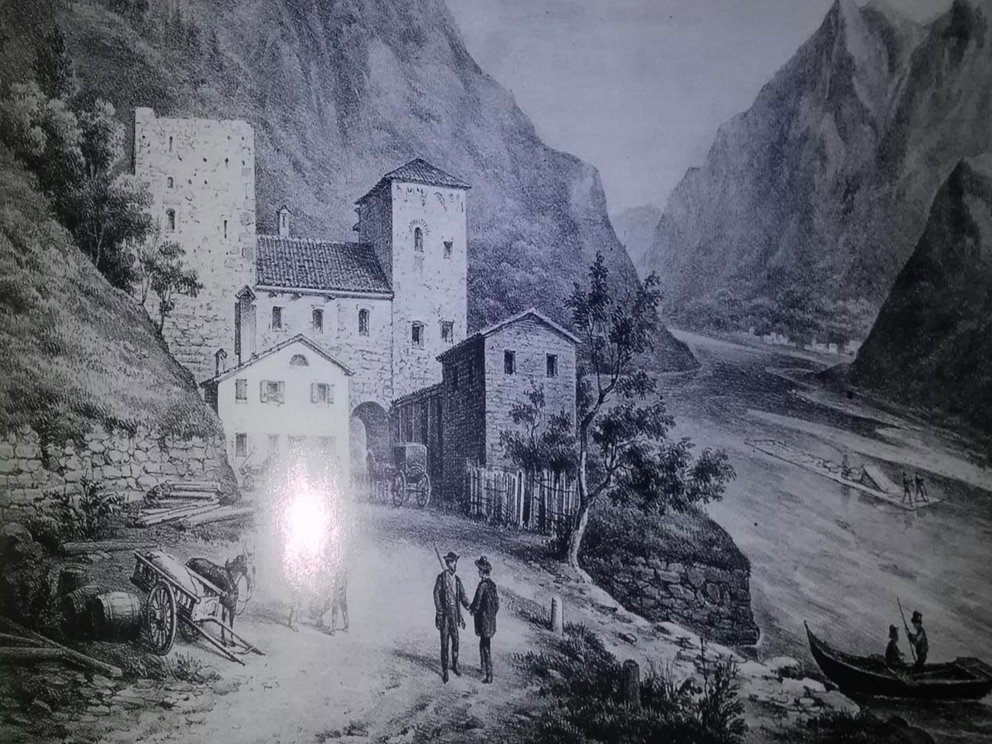 (2) At the close in the south of the Piavetal valley.

Towards the end of the Middle Ages and the beginning of the modern period, royals and merchants started to invest in road improvements again to boost the economy and increase tax revenue. A merchant called Kunter from Bolzano/Bozen ordered the repair of the road through the valley north of Bolzano. Unlike in Roman times, travelers had now to pay tolls to use the roads. The Starkenberger dynasty from Tyrol had invested in the renovation of the Via Claudia Augusta between the Fernpass and Landeck, but they were viewed as highway robbers, because they recouped their investment through toll payments. The princes also collected tolls. Certain goods, such as salt, were even subject to special transportation laws: they could only be transported by local carriers and had to be unloaded and reloaded in special, licensed places. This was a vastly different system to the Roman internal market, which did not levy any tolls or customs at all. In both systems, many people lived along the road and made a living from it. Although the Via Claudia Augusta was no longer the most important and most frequently used road, it remained a significant Alpine crossing. The Brenner route only finally surpassed it in importance when the Brennerbahn railway and the Brenner highway were built.

The historical route, historical records, towns, monuments and exhibitions are pre-selected on this map. Zoom in on the map to see all pre-selected content. To select specific points individually and/or plan a trip, click the orange bars underneath this texts or click here.