It doesn't matter if you want to get a quick overview or to get full information, e.g. to plan a trip, or if you want to browse at home or during the trip. The Via Claudia Augusta Internet platform provides all the possibilities. Depending on which main menu item you use to enter, the content is prepared for different interested parties and different approaches. 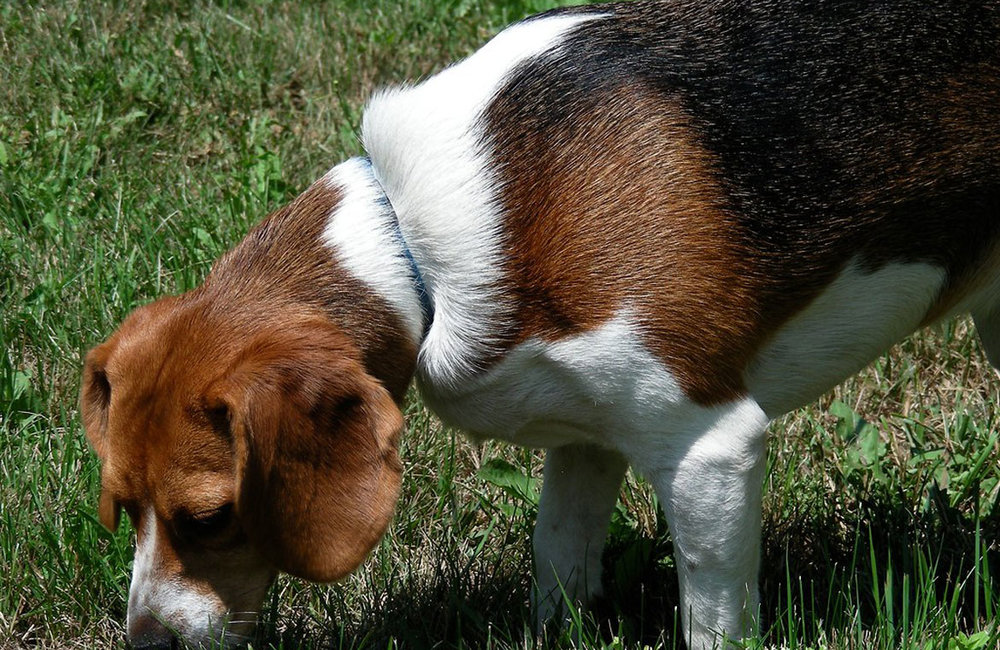 The Via Claudia Augusta Internet platform contains a lot of information, which is prepared differently for groups with different interests and approaches.  For those who simply want to get a quick taste of what the Via Claudia Augusta is, what it offers, whether it is interesting for them, ... there is also a first page under each menu item, which gives an overview: In addition, the Internet platform works with many photos, which, as is well known, are saying more than 1000 words. Just get a taste of it!You are also welcome to contact us at any time. 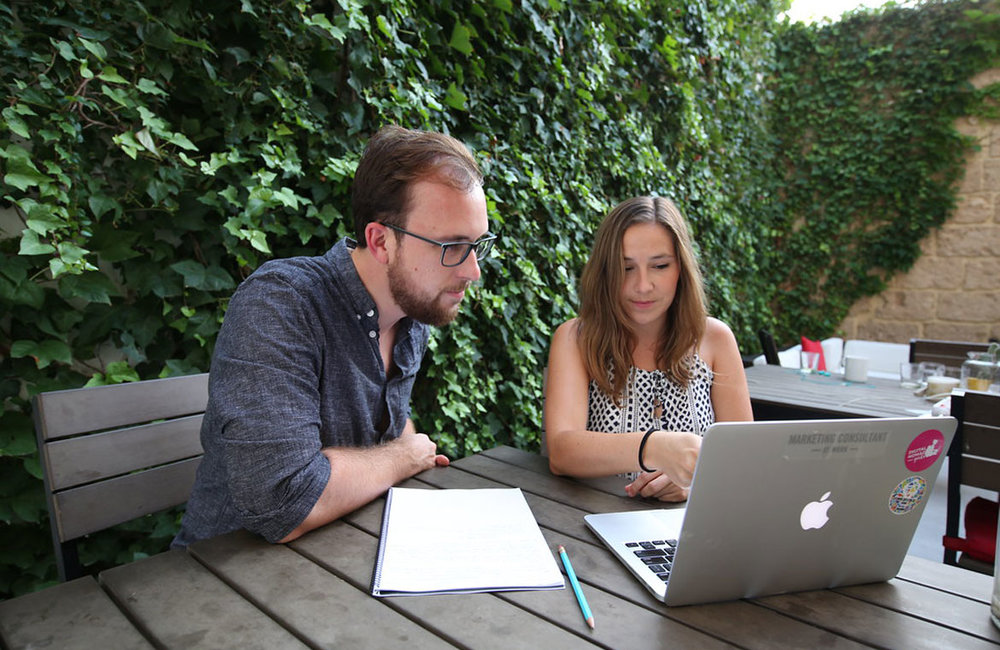 Everyone has a different approach and different interests. For this reason, we have prepared the Via Claudia Augusta in a variety of ways for people with different interests: for cyclists, for people primarily interested in history, for hikers, for people interested in contemporary culture or for gourmets ... Of course, in every description, including the one for cyclists, there is a little bit of everything. If, for example, a cyclist wants to know more about history, he or she can, in addition to the detailed description of the cycle route, also look at the detailed history of the regions and places along the route. Besides many pictures, all information is available in text form and also in map form. To plan your trip or for during the trip there are documents to download, printed guides to order and also a route planning tool that can be combined with the navigation apps for Android and iPhone. We are also happy to provide you with advice and information. Enjoy informing and planning! 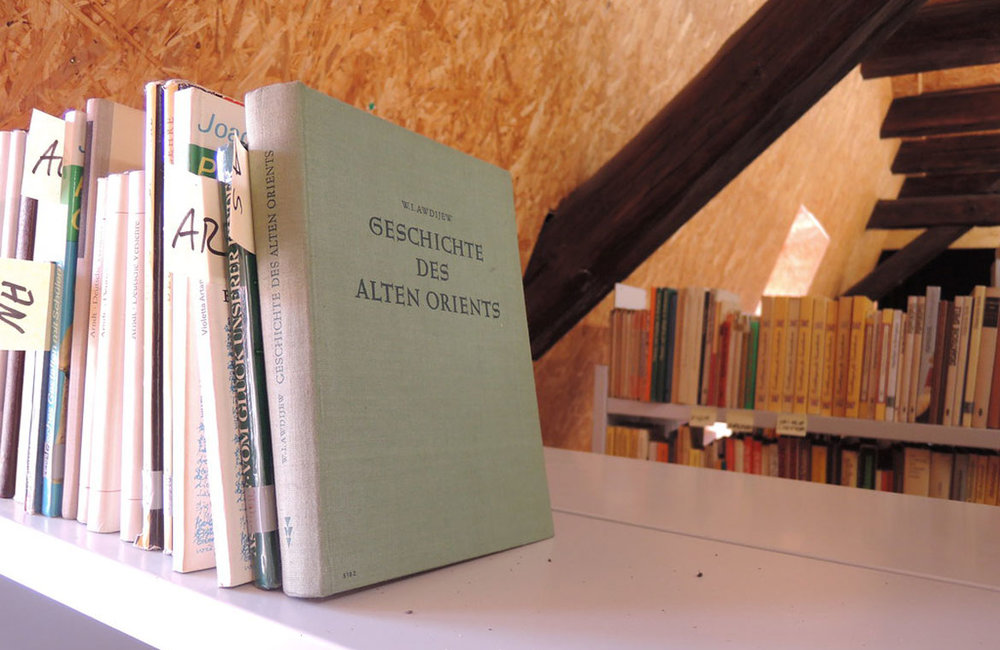 The internet platform also has a lot to offer for all those who are interested in the Via Claudia Augusta, who want to get more detailed information and/or get in the mood for discovering the Via Claudia Augusta. In addition to information in text, pictures and maps, with different focuses, there are, for example, video recommendations, book recommendations, successive historical maps of all regions along the route, a historical database for those particularly interested in history, ... All these things are not only available on your desktop computer, but also in the fully smartphone-compatible version when you are on the road. For example, every evening and/or tomorrow during a journey you can read up on the day behind you according to your interests and taste or get in the mood for the next stop ... This way you discover even more, you can classify things, understand them better and the experience becomes even more intense. Have fun with it! 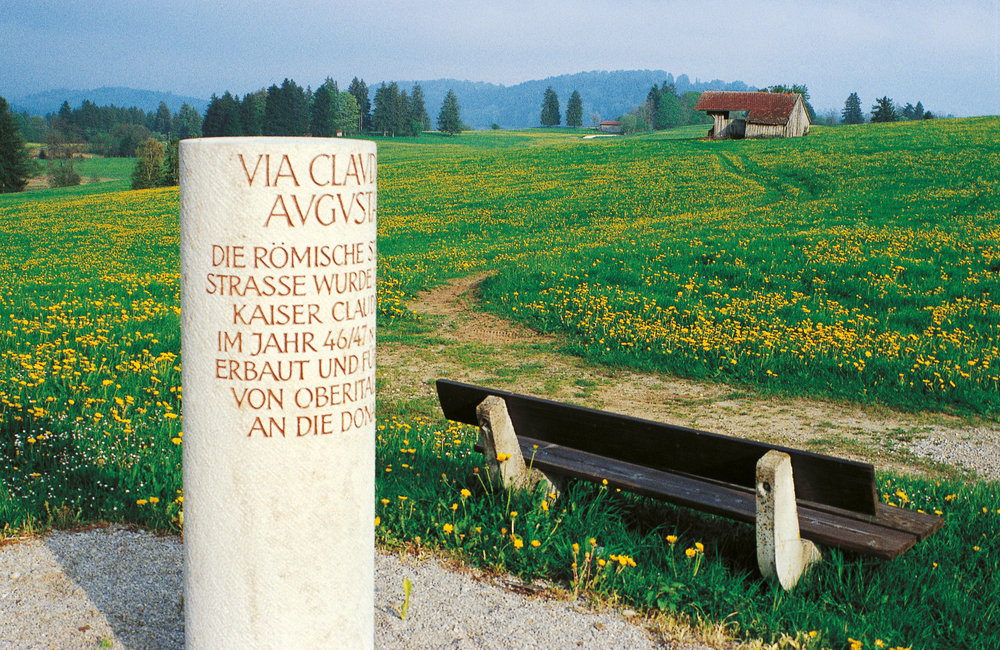 What is the Via Claudia Augusta?

The Via Claudia Augusta is a road that has connected the north and south of Europe for thousands of years - before the Romans, during the Roman Empire, in the Middle Age and in modern times - until today. See for yourself! 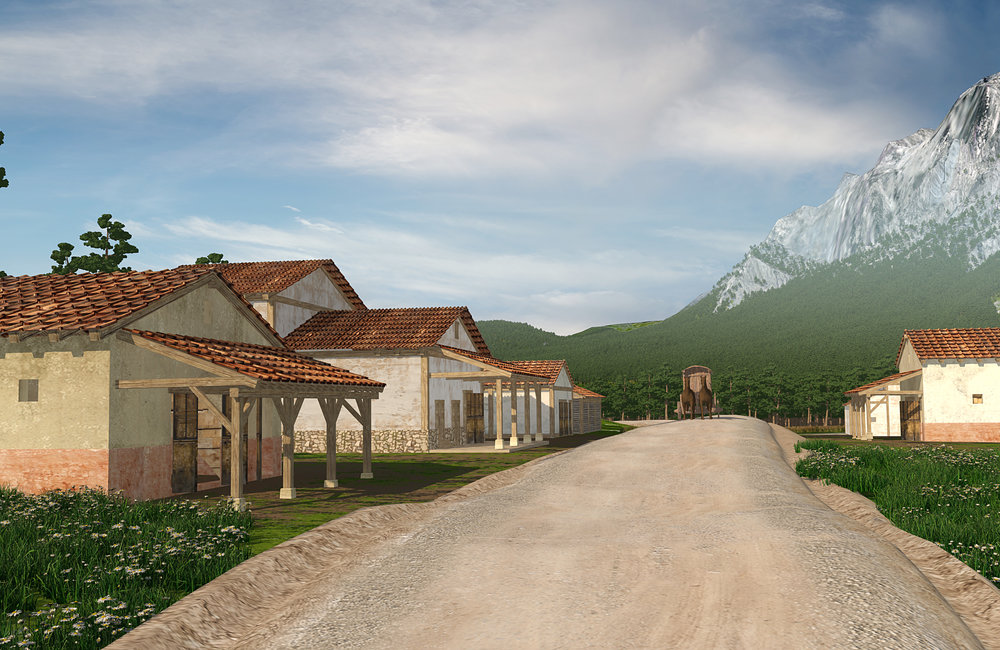 How can I imagine the history of the Via Claudia Augusta?

Already the Etruscans, Venetians, Rats and Celts were in exchange with each other. The Romans expanded their routes to become the first road over the Alps connecting Europe. The Via Claudia Augusta stretched from the Danube to the Adriatic Sea and the Po and connected the north and north-west of Europe with the south and south-east of the Empire. The road remained important in the following years. It was a trade route, an axis of encounter and cultural exchange and shaped regions, people and their cultures. Learn more about the history of the Via Claudia Augusta and the history of the regions and places along the old road, divided into Altinate and Padana. 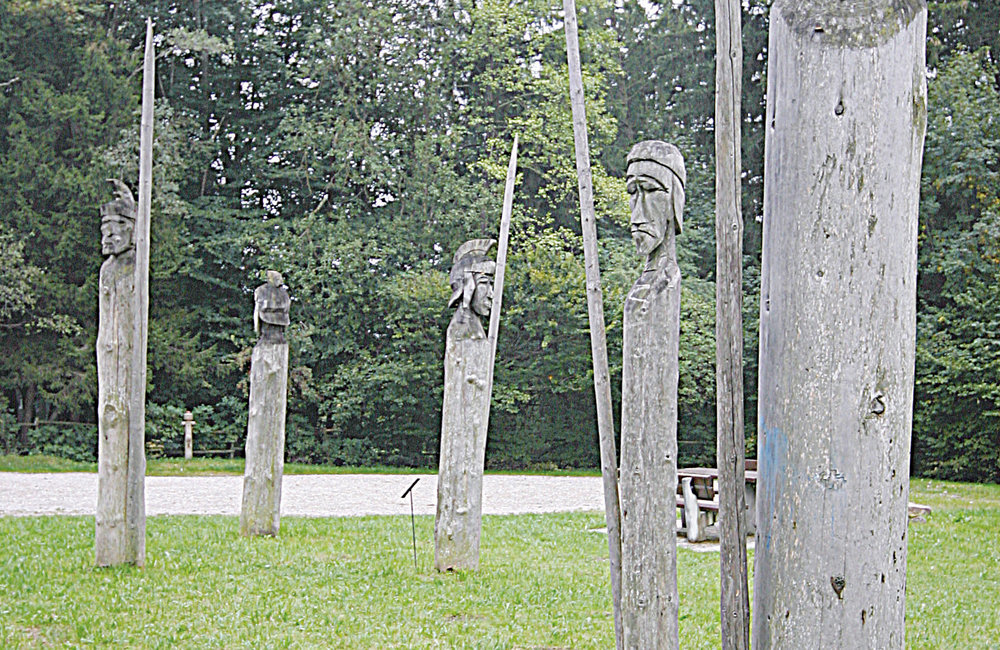 Cultural Street, ...? What is waiting for you along the Via Claudia Augusta? 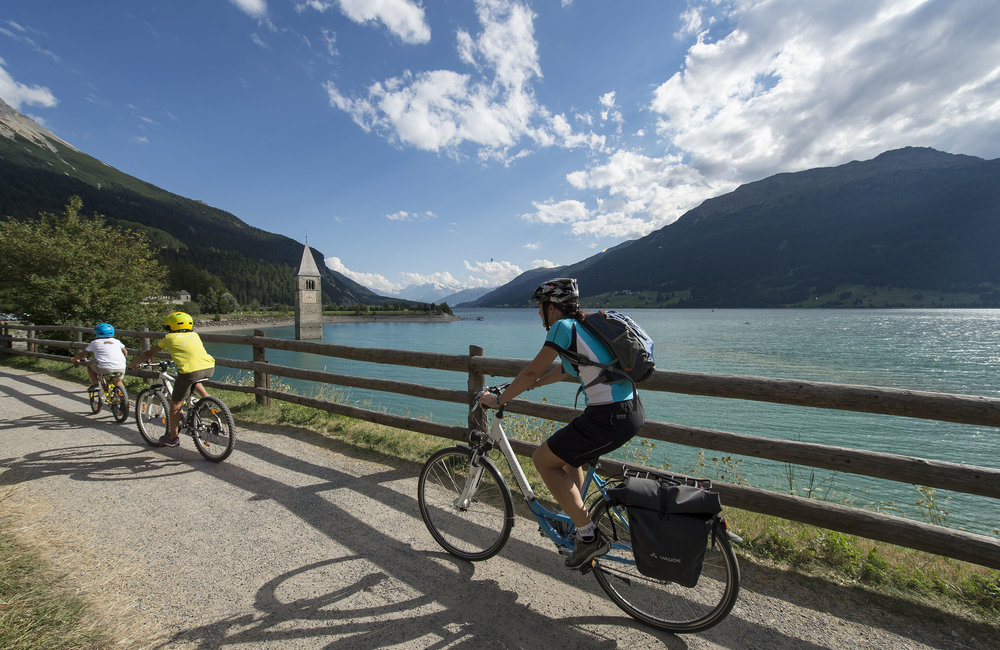 How can I discover and explore the Via Claudia Augusta?

Everything that has shaped the Via Claudia Augusta and what it is today can be experienced in different ways: on a cycling tour the easiest Alpine crossing for touring cyclists, during a long-distance hike in the footsteps of the Romans, travel route for car, camper, bus, ... along the Via Claudia Augusta, but also during an excursion or a few days' holiday in one of the regions along the route. 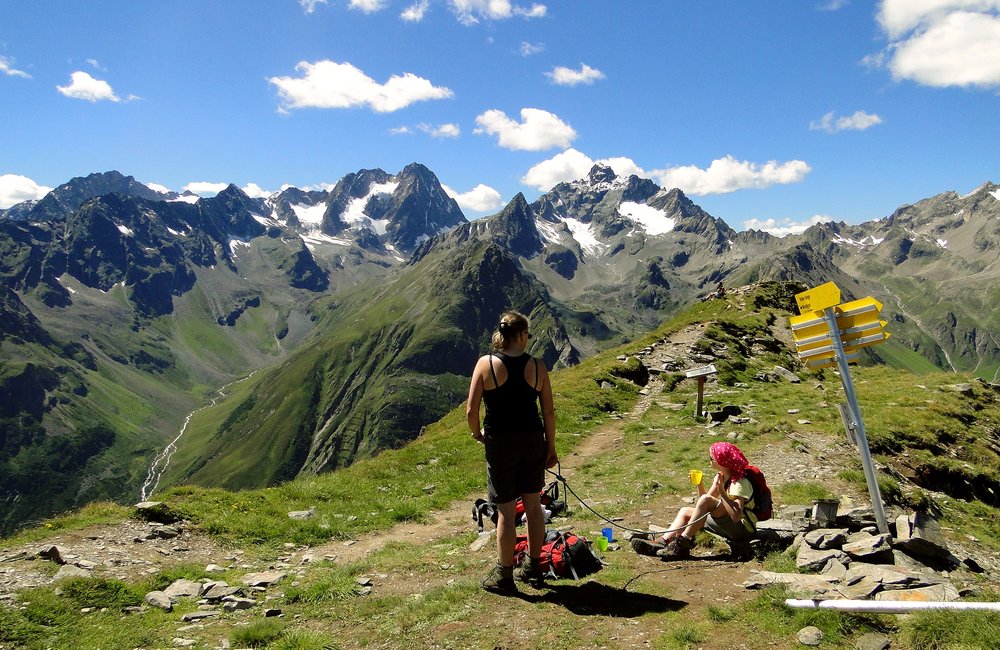 How and where can I spend my holidays along the Via Claudia Augusta?

Where can I taste the Via Claudia Augusta?

Thousands of years of encounters and exchange with people from many different countries have also brought a great variety of food specialities, ways of preparation, eating and drinking cultures. Some specialities were born in the regions and places, some found their way to the villages thanks at the Via Claudia Augusta. All of them are cultivated, developed and appreciated. Many even have their own festival. And there is also a great abundance of fine wines. The Via Claudia Augusta is not just one wine route, but  several wine routes are located along the road. Taste the Via Claudia Augusta. 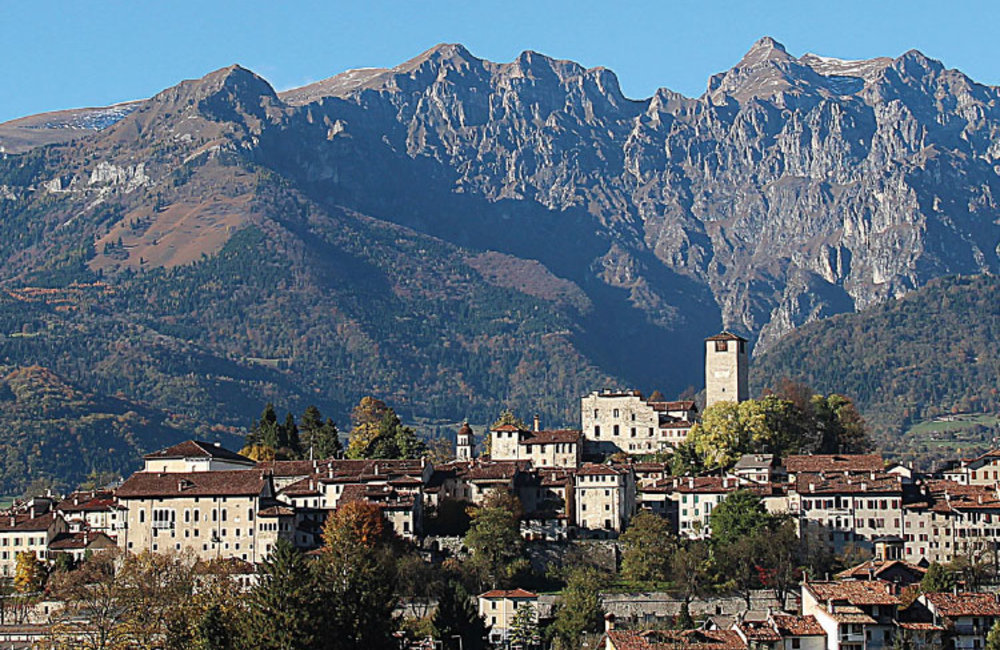 Within the framework of an Interreg project, the most interesting knowledge on the 2000 year history of the Via Claudia Augusta has been prepared for the general public, including a "virtual museum" on the new homepage and in smartphone apps, that will pique everyone's interest. 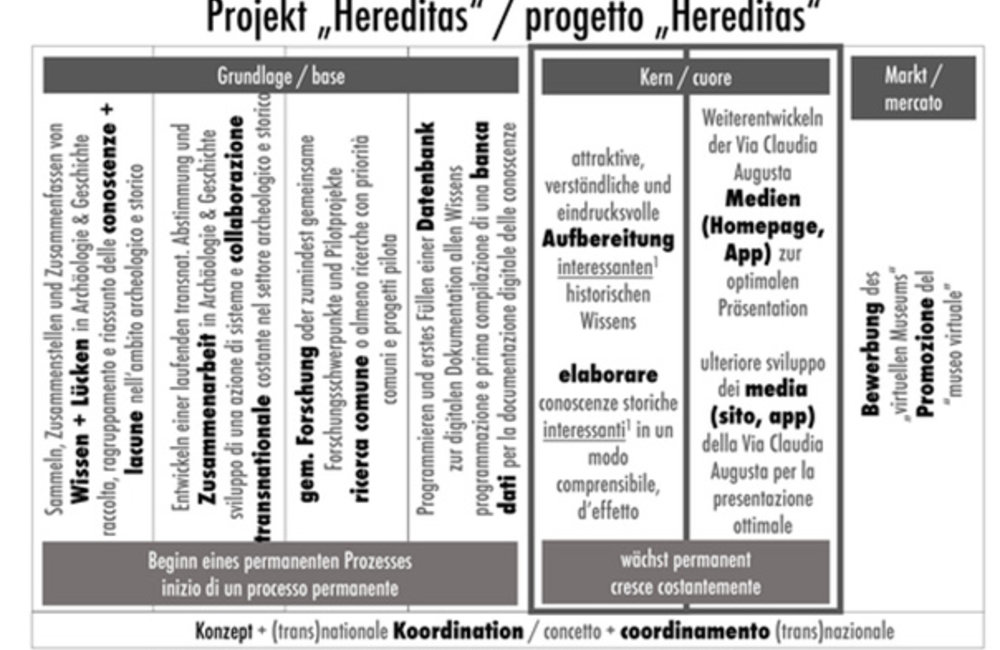 The realization of the Interreg project "Hereditas - Virtual Via Claudia Augusta" began in 2017. It is helping to give additional impetus to this ongoing work. It is therefore a kind of "turbo" fot the archeological and historical work of the Via Claudia Augusta, which also has a lasting effect. The core of the project is the digital processing of the most interesting knowledge on the 2000 year history of the Via Claudia Augusta for the general public, especially  in the form of 3D models. Furthermore, the project core includes upgrading the homepage and smartphone app to make there digital preparations optimally accessible to the population and guests - as a kind of "virtual museum" that interests and inspires young and old. Those interested an enthusiastic will also find - in search of more - more in museums, read up and discover testimonies of the historic road along the route.

To ensure that more and more knowledge on 2000 years of history will be available in the future. the funding project also provides for a systematic collection of existing knowledge by students, which is currently spread over 100e sources and many locations.

The most important measures are ... 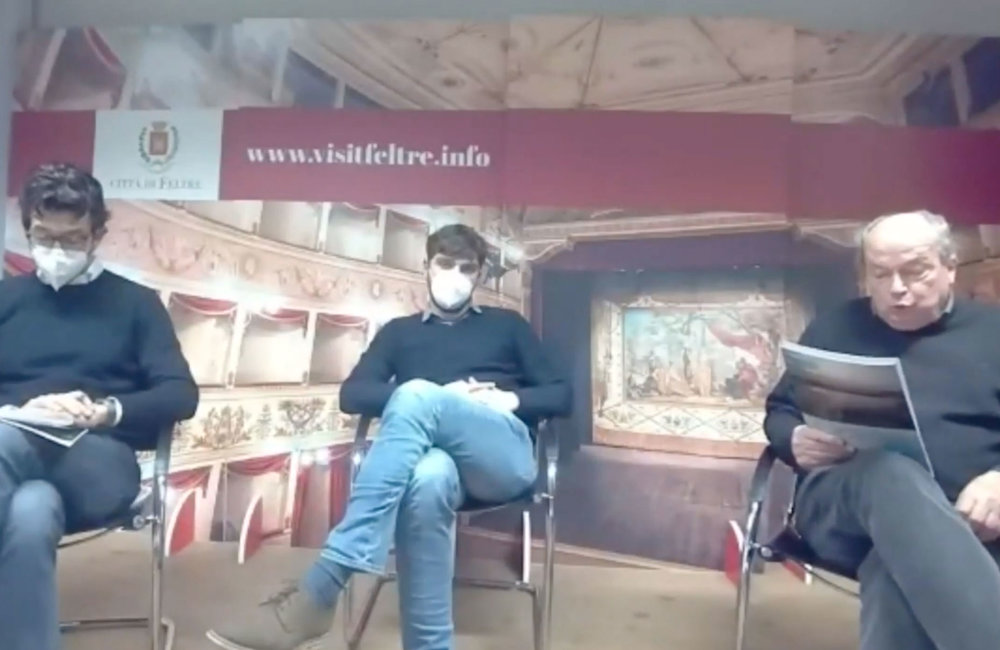 The final presentation of the project results
took place on December 15, 2020 at the Town Hall of Feltre.
(because of Corona by video-conference).

At the beginning the new documentary "Via Claudia Augusta, an artery at the origins of Europe" was presented. 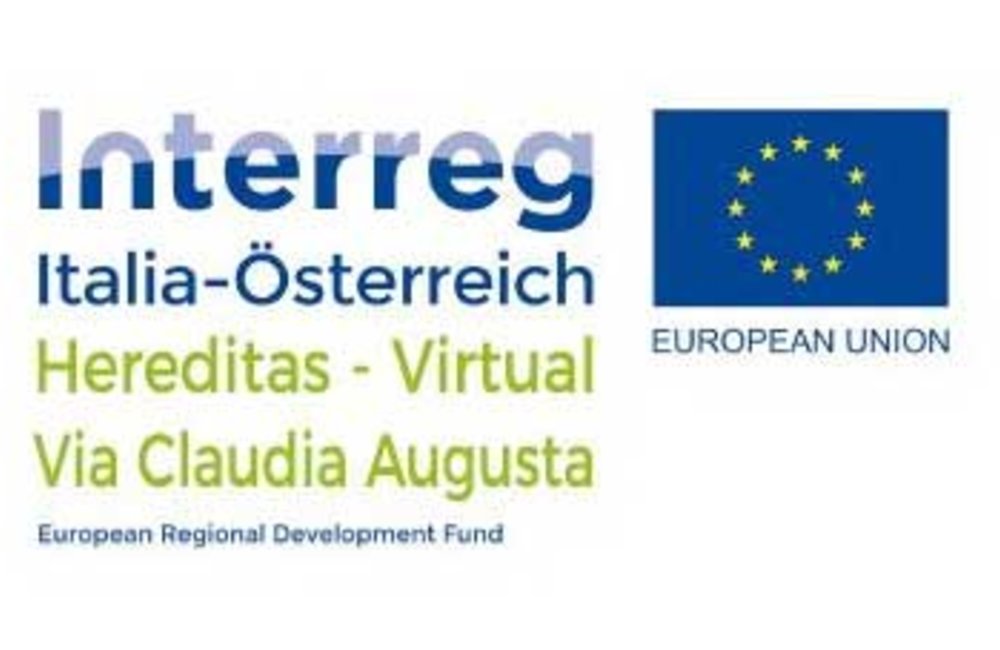 The project "Hereditas, Virtual Via Claudia Augusta" funded by the European Regional Development Fund and Interreg V-A Italy-Austria 2014-2020 with public funding of €. 375,423.75).
Projekt description: The objective of the project was to increase the attractiveness of the territories that follow one another along the road axis of the ancient Roman road and to strengthen their historical identity. With this intent, a series of multimedia initiatives were carried out that concerned communication through the improvement and updating of the contents of the internet portal, the creation of interactive 3D maps with applications to map the route, the elaboration and digital reconstruction of installations of great historical and landscape interest, the promotion in international tourist markets with advertising, public relations and online marketing, the production of printed and digital information material, and the organization of an international conference. The key action involved the creation of a Virtual Museum to represent the most valuable cultural heritage existing along its route with services and digital equipment usable by tourists and citizenship both at home and on the road.
Duration: 37 months (Start 30/11/2016 - End 31/12/2020).
Priority axis: 2 - Nature and culture
Thematic objective: 6 - Preserve and protect the environment and promote the efficient use of resources
Specific objective: 4 - Protection and enhancement of the natural and cultural heritage.
Action: 10 - Protection, conservation and soft valorisation of the common natural and cultural heritage.
Reference notice: Interreg V-A Italy-Austria - Call for proposals 2016
Project code: ITAT2007 - CUP B93J16000090004
EU financial support FESR: € 999.714.37
Financial support by the Region of Tyrol: € 85.900,00
Total budget of the project: € 1,549.942,50

New documentary film on the
Via Claudia Augusta

Schematic Roman map "Tabula Peutingeriana
& schematic maps of the Via Claudia Augusta ...
left and right of it

The Tabula Peutingeriana is the only surviving map of the Romans that shows the entire Roman Empire. It is not a geographically correct map, but a schematic map, similar to a subway map. It was very long and was rolled. Do you recognize Italy, in the second map from the left, in the lower 2 thirds, in the middle? Yes, that's Italy. The elongated water area to the left of Italy is the Mediterranean Sea. Following the schematic Tabula Peutingeriana, the Via Claudia Augusta also developed schematic maps. If a schematic map appears on the left-hand side of the homepage, it will show you which part of the Via Claudia Augusta the content concerns. If a schematic map appears on the right-hand side, it will show you the relevant section in detail.

Look at the maps, download them and get to know how you get the printed version. /